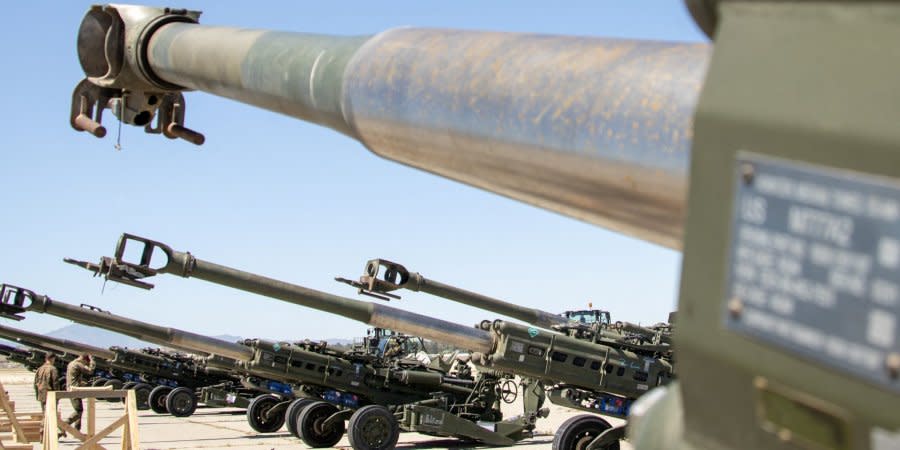 NV: Russian Defense Minister Sergey Shoigu said Moscow will be destroying the convoys that bring Western military aid to Ukraine. Do you think that is why we’re seeing intensifying missile strikes deep into Ukrainian territory?

Zgurets: Russia is doing a number of things to try and stem the flow of Western weapons into Ukraine – from diplomatic protests, to “active measures.” But our logistics that facilitates these shipments and their deployment is rather sophisticated. It’s not limited to railways, and the volume of incoming military aid is not decreasing, with other delivery and distribution methods remaining available.

Read also: After Russia’s war, a stronger Ukraine and West will emerge

I’d say that Shoigu is simply following the overarching Russian strategy to intimidate. Missile strikes do have an influence, but they can never force the West to rethink their policy of ensuring that our army grows ever stronger.

NV: US President Joe Biden announced a new aid package for Ukraine, worth $ 33 billion. What kind of weapons can we expect in it?

Zgurets: $ 33 billion really is a significant amount. $ 20 billion is explicitly dedicated to weapons. What kinds of weapons we need exactly is under constant review, in coordination with the Pentagon and all 40 countries that were present at the Ramstein meeting (US Air Force base in Germany), where the framework for Western rearmament of Ukraine was agreed.

What we need is artillery, reconnaissance systems, long-range weapons, and ammunition-the full spectrum of these armaments is unlikely to drastically change, it’s important to focus instead on the volumes and pace of these shipments.

NV: Is Ukraine going to be getting these $ 20 billion, or are we going to have to share these funds with other Eastern European NATO countries?

Zgurets: I expect it will be mostly focused on Ukraine. Some schemes, though, rely on Eastern European countries giving us weapons, and then the United States compensating those transfers.

NV: Recently, Commander-in-Chief of the Armed Forces of Ukraine Valerii Zaluzhnyi said that Ukraine is moving away from Soviet-era weapons and rearming with NATO-compatible equipment. How long could this transition take?

Zgurets: It makes little sense to politicize those statements and try to impose some timeframes on them. As it stands, we’ve considerably expanded the size of our army, established the Territorial Defense volunteer force, and created a reserve corps.

All those institutions need to be armed with some kind of weaponry-Soviet-made or NATO-supplied. We need to ensure all our forces have adequate firepower, protection, and mobility capabilities. In that sense, we’re going to use everything at our disposal, regardless of how modern the equipment may be.

We’re running out of Soviet-era ammunition: it’s becoming increasingly difficult to procure it, since its production ceased a while ago.

That’s why, for example, it makes perfect sense to transition our artillery corps to 155mm guns, considering those are the systems and ammunition we’re currently getting from our partners. Our missile artillery, armor, and electronic warfare are in a similar position. Those are the systems we’re getting more and more of from NATO members, so we will gradually transition away from Soviet equipment as it wears down and gets decommissioned.

What Zaluzhnyi said makes perfect sense, given that we have state policies of modernizing our armed forces in accordance with NATO standards. We have already made the switch in terms of our command-and-control structure, methodological and organizational approaches. But since we’re at war, we’re fighting with every gun we can get our hands on, abandoning weapon systems once we run out of ammo for them.

NV: According to CNN, the Unites States has trained around 100 Ukrainian service members to use US-made artillery. They will, in turn, train many more of their colleagues in Ukraine.

Zgurets: That’s one of the vectors of military training. It’s ongoing, in parallel with military aid shipments.

A couple days ago, we got French-made Caesar self-propelled howitzers. Similarly, our artillerists were trained by French specialists. I suspect the same will happen with the German artillery we’re getting. All this training is done abroad, in particular – in Poland.

It’s all part of the general framework of Western military support of Ukraine.

NV: German newspaper Die Welt reported that Berlin has decided to give Ukraine seven howitzers, even though they have 40 of them in cold storage – the rest are, allegedly, in poor condition. Reportedly, this was a political decision, made despite opposition from Bundeswehr officials.

Zgurets: Germany has significant weapon stockpiles. Right now, they are maintaining that they have already supplied Ukraine with everything they could. The snag is that certain German weapons manufacturers – like Rheinmetall, which makes howitzers – have more arms at their warehouses that could be sent to Ukraine. And these German private companies are saying that the government can increase aid to Ukraine, because the German private sector has more weapons reserves than the Bundeswehr.

We expect to get not three, five, or seven German howitzers, but 50+. The United States gave us 90, other countries – around 300 units. It’s near the number of artillery systems we had when the war started in 2014. Those were 152mm guns. Meaning that in real terms, we’re growing our artillery firepower. And on this scale, seven howitzers from Germany seem like a bit of a joke.

NV: Would there even be any use from these German howitzers? There’s been so back-and-forth around them.

Zgurets: Let’s unpack this into the guns themselves, and Germany.

Our problem is that Russia is currently relying on its overwhelming artillery firepower. There were times, when near Rubizhne (in Donbas), Russia had a 20 to 1 advantage in barrage intensity over our forces. Basically, for every shell we fire at them, the Russians would lob 20 shells back.

That means they have a numerical advantage in long-range firepower. Unlike Ukraine, they don’t have to conserve their ammunition reserves. Artillery has become the dominant dimension in the current phase of the war, and we need to deploy significantly more guns on the battlefield, so we need all the help we can get there.

Second: range of these howitzers. All European 155mm howitzers have greater ranges than standard-issue Russian Msta-S and Msta-B systems, which can fire at targets 20 kilometers away. German guns are at least 30% more or even twice the range, compared to the Russian ones.

That means that we’ll be able to destroy Russian artillery, while keeping ours intact, at a safe distance. French and German howitzers are also more accurate. High-precision munitions (like the US-made Excalibur rounds) can destroy a target from 40 kilometers away with a single shell, with pinpoint accuracy. We would have to fire 560 rounds to achieve the same effect, using our current artillery systems.

In general, transitioning to NATO military tech – be it US, French, or German – drastically increases our range, and decreases the rate at which we exhaust our ammunition. That’s what we’re looking for in our cooperation with foreign weapons manufacturers.

NV: Russia is actively supplying its forces in Ukraine from Crimea. Do we have any tools at all to try and disrupt this supply line?

Zgurets: As Crimea is itself dependent on supplies from Russia via the Crimea Bridge, everyone keeps saying we need to bring the bridge down. The problem is, it is some 280 kilometers away from Zaporizhzhya, from Mariupol – a little closer.

After Russia captured southern Ukraine, we no longer have missiles with enough range to threaten the bridge over Kerch Strait. If we find a spot 280 kilometers away from it, we can try to do something with Neptune missiles, but I don’t think that makes sense, given how few of them we have, and how unlikely the attack is to succeed.

I think the question (of destroying the bridge) could become more reasonable in due time, after we get long-range US weapon systems, with plenty of missiles to spare. Even then, it will take a well-planned operation to get them in range first.

NV: Neptune missiles are the core of our naval deterrent.

Zgurets: Right, they were designed to strike at enemy ships. The warhead’s guidance and targeting systems are best suited for identifying naval targets.

NV: Theoretically, can they be used to strike at ground targets?

Zgurets: Yes, but every weapon still has an intended use. While it’s possible to destroy a bridge with anti-ship missiles, certain technical and tactical complications will have to be taken into account and properly managed. Besides Neptune missiles being capable of destroying a bridge in the first place, this particular bridge is under saturated anti-air defenses.

NV: Military experts point out that some of the cruise missiles Russia launches at us, are, technically, anti-ship missiles, being used against ground targets.

Zgurets: True. Russian Bastion launch systems were recently used to fire Onyx anti-ship missiles at Odesa. But given our situation, it’s prudent to save anti-ship weapons to sink enemy landing ships, because the threat of a naval landing is still very much a thing.

NV: The Kremlin continues to use their missiles rather liberally, without trying to conserve their stockpiles at all. Do they really have that many of them on hand?

Zgurets: They use a whole range of missiles: air-to-surface cruise missiles, guided ballistic missiles for their Iskander launchers, and long-range Kalibr cruise missiles, launched from ships and submarines. I assume they think they’re doing everything right.

I estimated that Russia had around 900 Iskander-launched cruise missiles when it invaded Ukraine. They have 200 of them left, at most. Sea-launched Kalibrs have dwindled from 500 to 350. Their production capacities are rather low, so the stocks are growing thinner. Nevertheless, those 200, 300, or 400 missiles they still have, pose a serious threat to us. That’s why we have to keep improving our air and missiles defenses, however diminished Russian missile munitions might be. A single missile can still pose a critical threat.

NV: The escalating diplomatic row between Israel and Russia invites the discussion of Israeli weapons Ukraine could potentially use. Should we expect something like the Iron Dome?

Zgurets: We requested certain weapon types from Israel at the invasion’s onset, but they were declined. Israel does have a number of things we would find very useful indeed: loitering munitions, anti-air and anti-missile defense systems.

Germany is currently in talks with Israel, looking to procure a missile defense system that would protect Berlin from Russian Iskander and Kinzhal missiles – exactly the threat we’re facing.

However, the Israeli Iron Dome won’t be of much use in Ukraine. That system is designed to intercept short-range missiles. The concentrated firepower of Russian MLRS on the battlefield would quickly overwhelm and exhaust an Iron Dome system.

I would suggest we should look into getting more powerful Israeli missile defense systems, loitering munitions, electronic warfare systems to jam Russian warplanes, and so on.

Israel is maintaining a balanced, neutral posture in this conflict. I would be very surprised if we can get any significant military aid from them.