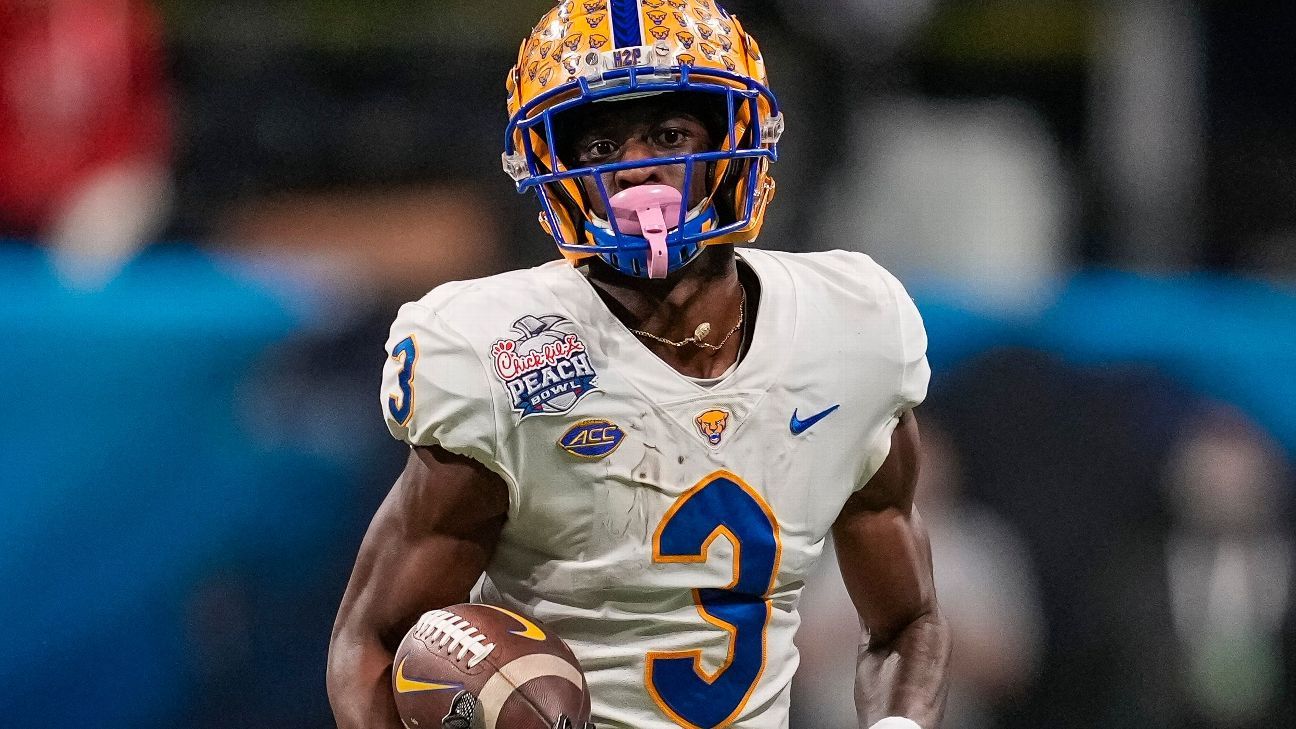 As the college football world turns, yet another player is bolting for greener (and warmer) pastures. This time, though, it’s the best wide receiver in college football. Biletnikoff winner Jordan Addison announced Thursday he will be transferring to USC from Pittsburgh, where he totaled 1,593 yards and 17 touchdowns last season.

After a free-agency-type tour that included visits to Texas, USC and Alabama, Addison opted for the Trojans and playing alongside fellow DC-area prospect Caleb Williams, who transferred from Oklahoma and seems to have attracted Addison to USC in the first place . Addison is the latest premier addition to USC’s overhauled roster following the arrival of Lincoln Riley, and he gives USC a clear-cut No. 1 receiver ahead of a season that’s gathering more hype by the day.

The decision is said to have been more about football and developing for the NFL than any name, image and likeness potential USC could have unlocked for Addison. So, what does a move this seismic and unprecedented mean for USC, Pittsburgh and the current, evolving state of college football? Our staff weighs in. – Paolo Uggetti

Does this move make USC a title contender?

Heather Dinich: When asked what’s fair for his fans to expect this year, Lincoln Riley told ESPN on April 21 it was difficult to say because there was still so much roster work to be done. If he had his entire roster complete, “like a normal year, you’d typically be pretty close” to being in the mix for the national title.

“Whatever we end up with roster-wise, our No. 1 goal has got to be for that roster to become as good as it possibly can be for that team to become as good as it can be,” Riley said. “With the staff that we brought in here, we’re not a group that’s gonna come in and settle for anything less than winning championships. I mean, that’s what we’re all used to doing. That’s kind of how we’re all wired, which fits in very well with this place and the history of this program. So I mean, regardless of the situation, championships is always the expectation, no matter if it’s Year 1 or Year 20. “

Kyle Bonagura: Addison obviously adds more star power to a program that has been collecting it over the past several months, but I don’t think his arrival puts the Trojans in a different national title contending tier than they were last week. They should be in the conversation, just not among the favorites. Not yet. It was already fair to expect an explosive offense. The defense is a more important variable here, and it’s harder to project what to expect on that side. It should also be pointed out that USC is still very much chasing Utah in its own division.

Andrea Adelson: I am not sure about a national title contender, but I would not be shy about saying USC is a Pac-12 title contender. I thought that before the Addison move, because Riley has proven himself to be one of the best offensive coaches in the game, and he has a quarterback familiar with his system ready to go. With the state of the Pac-12, it is easy to connect dots and say Riley will have USC rolling sooner rather than later. It is a little easier to believe that now with Addison on board. I had one NFL scout tell me last year that Addison already had a first-round grade, and he was a superior choice to Kenny Pickett in terms of NFL upside. Being in the Riley system should only help him, and the overall team.

Paolo Uggetti: Though Riley has been adamant that he’d prefer not to build a team this way, there’s no question USC is going for it the next two seasons with Williams under center and is doing everything in its power to get as much talent around him. Addison is an elite addition to a wide receiver room that’s already bursting with talent, and yet questions still abound at less flashy positions. It remains to be seen how much defensive improvement the Trojans can make since last season under a new staff and with new additions, and none of the offensive talent will be able to flourish if the offensive line isn’t up to par, either. USC’s schedule appears easy at first glance, but for an entirely new team trying to gel, any game could be a challenge. All that being said, I wouldn’t be that surprised if USC ends up winning the conference and being in the conversation.

Tom VanHaaren: Title contender, probably not. But, Pac-12 contender, yes. The staff has made some huge splashes on offense, especially now with Addison, but I still have questions about the offensive line and the defense. The defense is losing a lot in the secondary that needs to be replaced and some big pieces up front. Adding linebacker Eric Gentry, who transferred from Arizona State, was a big deal, but I think there are still questions I need to see answered on the field before we jump that far ahead.

Where does Williams/Addison rank in QB/WR duos for 2022?

Uggetti: Despite the firepower that the Williams-Addison combo could bring to the West Coast, it’s still hard to go against the known quantity of CJ Stroud and Jaxon Smith-Njigba in Columbus. After losing Chris Olave and Garrett Wilson to the NFL, Smith-Njigba is set to explode as Ohio State’s top receiver alongside a Heisman candidate like Stroud. Addison and Williams could easily reach that kind of potential, too, but they would be just behind them … for now.

VanHaaren: Most of the top receivers from last season are gone, so they rank pretty high on the list for that fact alone. But, Williams also has Mario Williams on the roster and we shouldn’t forget about the chemistry they already have. I agree with Paolo about Stroud and Smith-Njigba, especially with what we saw last season and in the Rose Bowl. I’m interested to see Xavier Worthy and Quinn Ewers at Texas, and he’s not a receiver, but Georgia tight end Brock Bowers had 13 receiving touchdowns last season. That being said, I don’t know that you can stack many other duos up with Williams and Addison outside of Stroud and Smith-Njigba given who’s returning this season.

Bonagura: We could go around in circles about which tandem is the best and end up being completely dissatisfied with the conclusion. I like to look at these things in tiers, and what’s clear is that Williams-Addison can be as good or better as any other combination in the country. Is that first? Third? Fifth? Regardless, USC begins the year with a potential All-American QB and receiver. The last time USC had a first-team All-American QB and a first-team All-American WR in the same season was 2005 (Matt Leinart and Dwayne Jarrett).

Adelson: If we extrapolate the way Jameson Williams came into Alabama a season ago and formed one of the best duos with Bryce Young, it seems logical to predict that Georgia transfer Jermaine Burton will be in line to do the same with Young in 2022. After all, Alabama is in need of a go-to No. 1 receiver, and Young has proven he knows how to get the ball in the hands of his playmakers after a Heisman-winning season. Of course, that role could fall to Louisville transfer Tyler Harrell. Whether Alabama ends up with the best QB-WR duo or not, history has shown the Crimson Tide will end up with multiple receivers in any given year who end up becoming stars. They already have the QB who fits the part.

With the new setup, who do you have playing in Pac-12 title game?

Uggetti: There’s now a world in which USC could face Utah in the Pac-12 title game and, despite what USC has done to put a competitive team on paper ahead of this season, the Utes remain a likely favorite in the conference thanks to their continuity. The Trojans’ schedule is easier than most and, barring a dream debut season in Eugene for Dan Lanning, there’s a good chance we might see an all-South championship game.

Bonagura: Paolo is spot on here. More than Addison’s arrival, the Pac-12’s announcement that the teams with the two best records will play in the conference title game makes USC’s path a bit easier. Utah still deserves to be the favorite going into the season. The conversation beyond the Utes starts with USC and Oregon.

Who will be biggest impact transfer of the offseason?

Uggetti: I still think it’s Caleb Williams. His arrival at USC has completely shifted the tone of the program from what felt like impending excitement under Riley to the possibility of imminent success. William not only raises USC’s ceiling by himself, but he also seemingly has the power to attract a player like Addison who, in a previous world, might not have even considered transferring to USC.

VanHaaren: Caleb Williams is probably the answer, but I’m still looking at Ewers at Texas and what that offense has added, as well. Ewers was the No. 1 prospect out of high school and has plenty of options around him to spread the ball around. He is still unproven, but if he has success and turns things around at Texas, that’s an accomplishment we haven’t seen in quite some time.

Bonagura: In the non-Caleb Williams category, it’s … his likely replacement, Dillon Gabriel. How the Sooners respond from losing Riley and several key players will be a major storyline in 2022 and if Gabriel is able to replicate the success he had at UCF, Oklahoma should be in good shape.

Adelson: I also agree on Williams, but I want to highlight the quarterback on the team he left behind. Gabriel looks to establish the type of consistency Oklahoma is used to at quarterback after transferring from UCF. His first two seasons were terrific, throwing for more than 7,000 yards and 61 touchdowns. An injury cut short his junior season. But he is now reunited with offensive coordinator Jeff Lebby, who coached him at UCF in 2019 – his breakout freshman season. If Gabriel can put up the type of numbers he did early in his career, he will help make it a seamless transition for new coach Brent Venables.

Where does Pitt go from here?

Adelson: Without question, losing Addison only adds to the offensive transition at Pitt – considering quarterback Kenny Pickett is gone, along with offensive coordinator Mark Whipple. But at least Pitt had a spring to go through a quarterback competition between Kedon Slovis and Nick Patti, with new offensive coordinator Frank Cignetti Jr. installing his system. Losing Addison after spring practice only makes the blow that much worse. Having said that, the Panthers do have Jared Wayne (second on the team in receiving) in addition to several others. Konata Mumpfield, a freshman All-American receiver at Akron a year ago, had a promising spring and will be in line to start. Jaylon Barden is another young player Pitt will look to as well. Perhaps Pitt will look at the transfer portal at some point, but for right now the reality is the Panthers will have to find a way to move forward without the player they projected as the centerpiece of their offense.